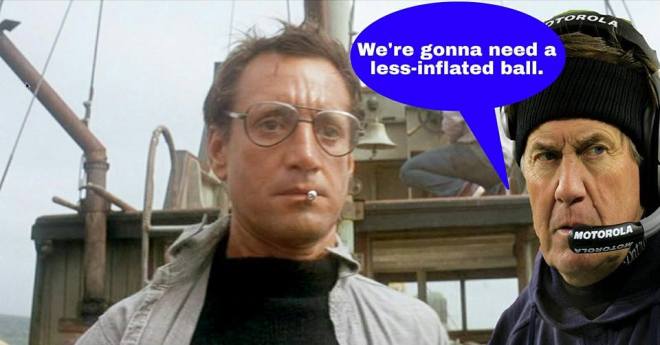 Today is Super Bowl LI. Patriots vs. Falcons. LADY GAGA! What follows is a detailed position-by-position breakdown of both teams, a look at potential X-factors, plus an oral history of Deflategate. Wait, no it isn’t.

Back in 2012, I decided to move to Boston after six years living in Hoboken, N.J. Well, less decided to move there and more ended up moving there since I didn’t find myself a new place in the Hoboken/NYC area despite the fact that my roommate at the time had given me a year’s notice that he was planning to shack up with his now-wife. (I think that was around the time I watched the entirety of the TV show “Lost” — 121 episodes! — in a 3-month span on Netflix, which, looking back, might not have been a great period of time for me mental-health wise.)

Anyway, it was 2012 and I was living in the Allston area of Boston with my older brother Jim. Just a few blocks from my apartment was the Sil (aka the Silhouette Lounge), a bar I would often frequent. One Sunday, I headed over after work to watch the second half of the Patriots game. I was by myself, so I took a seat, ordered a PBR tall-boy and settled in for an enjoyable late-afternoon of NFL football.

Sitting next to me was a 30-something dude in a Tom Brady jersey. Now, I am generally not one to strike up conversation with strangers, but during a sporting event at a bar, conversations with strangers are hard to avoid. At some point late in the third quarter, Brady threw for a TD, and the guy said something like, “Sick fucking pass!” then looked over at me; so I was obliged to kind of nod and halfheartedly agree: “Yep, fucking sick pass, man. NEVER COUNT OUT TOUCHDOWN TOM.” He, also sitting by himself, decided we were now friends and were going to have a nice chat.

So he tells me why Brady’s god and why Gronk’s the man and I tell him I’m from New York so he bitches about the Giants and how Eli’s not elite despite the fact that I inform him I’m a dreaded Cowboys/Yankees fan. I also realize he is super high . Then he shuts up for a bit before saying, “I’m a hardcore fan. Once it’s half-time, I’m heading home so I can fully lock in on the end of the game.”

“Can’t have any distractions for the second half,” he said.

“There is legit 45 seconds left in the fourth quarter.”

He stared at me for a few seconds, collected his things, exited the bar, and I never saw him again during my four years in Boston.

Trump has a superstar bio on wwe.com that mentions the fact that he’s our current president:

“From captivating billionaire to reality TV star, from WWE Hall of Famer to the 45th President of the United States, Donald J. Trump has truly done it all.

“… After trading in his favorite television catchphrase “You’re fired!” for a national promise to “Make America Great Again,” Donald Trump won his first presidential campaign against key contender Hillary Clinton and officially took the oath of office on Jan. 20, 2017, to become the 45th President of the United States — the first time in history a WWE Hall of Famer would ever hold the distinguished title of U.S. Commander-in-Chief.”

But other than that, WWE hasn’t really played up the fact that someone who has hosted a pair of Wrestlemanias, took part in a “Battle of the Billionaires” with WWE chairman Vince McMahon and once briefly “owned” RAW is now leader of the friggin’ free world. It’s possible they have, but — outside of his updated bio on wwe.com — I don’t think they’ve mentioned it on their website, Twitter, Monday Night RAW or the WWE Network.

Trump and Vince McMahon are, as far as I can tell, friends. Linda McMahon, the former chief executive officer of WWE, was tapped by Trump, and approved, to lead the Small Business Administration (she and Vince also donated money to support Trump’s campaign). Stephanie McMahon, WWE chief brand officer, and her husband, Paul “HHH” Levesque, WWE executive vice president, talent, live events & creative, attended the inauguration (although note that Stephanie doesn’t mention Trump by name in the caption for the photo).

Regardless your politics, it was an honor to witness the peaceful transition of power as our 45th President was inaugurated. #ProudToBeAmerican

Also, it’s not like WWE hasn’t mixed politics with wrestling before. A Bill Clinton impersonator was at Wrestlemania X. Gennifer Flowers, who allegedly had an affair with Bill Clinton, interviewed the Rock at Wrestlemania XIV (an interview that, according to wwe.com, “marked the first time the People’s Champ uttered his famous catch phrase, ‘If you smell what The Rock is cooking.'”).  In 2008, Barack Obama, John McCain and Hillary Clinton responded to WWE’s Smackdown Your Vote! campaign.

So why … WHY … has WWE downplayed the Trump connection? Did Trump ask them to? Does WWE think mentioning him will anger a significant portion of their fanbase? Or is it that Trump’s America doesn’t jive with that of John Cena’s?

I’m not sure. But the American people/WWE Universe demand answers.

You can’t see me: Why is WWE downplaying ties to President Trump?
Loading Comments...